Close your eyes, asks Gabriel, gently. He asks it almost as a question – what would it be like to close your eyes?

I have been thinking about the weekend we spent at Anna’s house. Early November in 2014, with a houseful of near-strangers, Anna’s home in Winchester is bustling with activity and energy – and some of that energy has a kind of nervous frisson to it. Nerves about writing, and about sharing writing amongst this group of strangers. Anna and Pauline have installed films – fragments of films really – in different rooms and corridors of Anna’s home. I’ve had the privilege of seeing them alone the night before, but they feel different now that there are fourteen other wanderers keen to engage with the creative process of embodied interpretation.

We’ve planned the weekend around three workshops: one about creative writing (led by Claire Hillier and Joan McGavin), one about connecting bodily to moving images through dance (coached by Gabriel), and one about what Mel describes as tacit drawing: a kind of performance through mark-making. It is my job to kick-start things with an hour’s discussion about interpretation, what it means to the participants, and how to approach creative activity through the frame of interpretation. Each participant has brought with them a description of what interpretation means to them. After the discussion takes place, I splay out a cartography of meanings across each handwritten note. 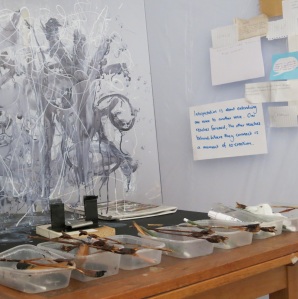 They seem to connect through a whole range of shared connotations. They are not all the same, either: some come across as prescriptive or demanding, some as almost carelessly free. Others strike out at metaphors or images to describe what happens when we interpret. I get the feeling that interpretation, when described in words, often takes the form of something else: another transformation that shows the shift from one sense into another.

I like the idea of interpretation that cannot be pinned down, nor be made entirely free. I think of the looped film, projected onto the inside of a drawer in the kitchen, that we later use as part of a creative writing exercise. Simple kites in primary colours, bobbing and surfacing against a whisper-blue sky. Those kites are neither fixed in place, nor free to flee the frame. Perhaps that film-in-a-drawer is my metaphor for interpretation: straining against an impetus to be free, and a creative need to remain within a frame, within a box, within a house.

I also think about ‘home movies’, and the ways that this house of installations could be so easily described using that visual pun. There is something very special about film installations in domestic spaces. I have seen this before in Anna’s work, especially her artist-in-residence project at Mottisfont, and in her group exhibitions with the Neuf experimental film group in Cambridge. Sitting with an installed film – one that flutters in a matchbox, or one that seems to breathe with the draft in a corridor – these are experiences that feel very different to a cinema screen or a black box gallery. The domestic intimacy brings a different context to my body too, which is why, upstairs in the attic, when Gabriel asks us to close our eyes, I feel it is a question, or perhaps an invitation.

It is also why my responses to the film installed in the loft are so different, before the body-work exercise Gabriel gives us, and after. My body connects to the image – a giant, dew-laden spider web, stretched across the corner of the room – from my belly. That most vulnerable, centring, destabilising core of my emotion. When I read the prose poem I’ve written out loud to the others, Gabriel describes it in one word in Spanish – anhelo. Longing. There is some kind of yearning for something: a yearning to speak silently through my belly, rather than my hands. Not an erotic longing, but maybe a sensuous one: an openness to the possibilities of an umbilical thread tying me and the web, and the corner of the room, together.

I promised Anna my first blog post wouldn’t be too long, but already I can see it is unravelling beyond its means. So I will close with my rough, unhandled prose poem, thinking of bellies and webs, umbilical cords and spiders and motherhood. And the great spider-mother of them all, Louise Bourgeois.

I am spider-mother-matrix
My leaves quiver
Like a long spiny arm reaching over
You and them.
I feel decay inside – a dry chrysalis broken open.
And there she sits.
Spider. Mother.

Semaphore. Morse. Hand.
I am coded in the dots and stripes.
A wounded belly,
knotted around a stump
upturned to the sky.
Stabbing pain:
Waves, rays of sun.
Stare away from the light.
Cradle me. Rock-a-bye. Till she drops.

Spider. Mother.
That peachy flesh behind the net,
caught in the fabric of my pain.
A jagged corner rose thorn
pricks my skin and I will sleep.
Spider. Mother.